(A great place to start if you're new here is my Wide Spacing Roadmap.)

In part one, we looked at the history of the number sign in the last few hundred years.  A brief overview of some very rough dates and usages (most of which probably happened a little or a lot earlier than what I've found):

But I left out the hash (or hash sign or even possibly hash mark) as a name and a usage.  This name is by far the most dominant name in England for #.  And after all the British created the English language, so they should know, right?

In a blog posting at oxforddictionaries.com about the name of the symbol, they claim that "the most common is probably hash."  I'm not sure who's posterior this "fact" was removed from, but lets hope it wasn't too painful.  It's certainly not the most common name in American English.  Perhaps they didn't realize the Internet extends outside of Britain.

Of course I'll readily accept that the British could never readily accept # as pound sign for weight, because that's already taken with their monetary unit, pounds sterling (£).  We'll just ignore the fact that the monetary unit comes from pounds of weight, which even the British have written as the symbol ℔ (which turned into the #) and which they'll read as "pounds".  Whatever.

Perhaps the real question is, what is the pedigree for "hash"?  Maybe the Brits really are right, maybe this is the true and genuine real name for this ancient symbol.

I've searched around in the 19th century, where I knew that "pound" and "number" were both well-established.  They certainly didn't use the word as a name for that symbol back then.  "Hash" was however a slang term for food, usually bad mass-produced food, sometimes a specific type of dish of meat and potatoes and other things all mixed together (i.e. bad mass-produced food).

In the 1910s and 1920s I find references for "hash mark" that referred to the military (or civil) navy marks on the sleeve used to indicate rank or experience.  We still call them that today.

Then, there it was, a reference to "hash mark" in 1920 that seemed like some other meaning entirely.  Granted it was still in a naval context.  But this usage was new.  Perhaps I was on the right track?
There it is!  A "hash mark" is also a synonym for a food stain.  That settles it.

At some point in the middle of the 20th century, Americans began referring to some of the markings on a football field as "hash marks".  That is to say, American football, not real (cough) football.  So yeah, we're not even going to explore this one as a possible origin.

In the 1960s I see hash tables appear in computer discussions.  And hashing algorithms.  This is a method of compactly storing and organizing random data in a semi-sorted and rapidly accessible form.  But as far as I can tell (and I'm a software engineer) there's never been any association between this method and the number sign.

Also in the 1960s, some old manuscripts from Mark Twain are published, including a story called "Three Thousand Years Among the Microbes", originally written sometime between 1896 and 1905.  In this story, a new monetary system is recommended, consisting of tenths of pennies called bashes.  A thousand bashes is one hash.  Of course, in the printing I've seen of this, no number sign is apparent.  Plus, Twain is American, so... no help here.

It isn't until the 1970s that I see the word "hash" used to refer to #.  A couple of things happened around this time.  One is that touch tone phones became popular, and incorporated the same keypad as in America, with this new and alien (to British) symbol.  The other is that "hash" became a popular nickname for hashish (which by the way is the origin of the word assassin).

Now don't get me wrong.  I'm not suggesting that these two new uses of the word "hash" that happened at the same time had anything to do with each other.  I'm just presenting the facts here.  But the mere possible suggestion is interesting, because of the vacuum it fills.  That vacuum is the void that is not filled by a true origin story for calling # a hash.

Several online sources claim that hash came from "hatch", as in the cross hatching artists use when drawing.  Except, the only place I find this is in these claims.  They cite no additional sources, and I have found no additional sources.  I've only seen this as a just-so story presented to fill that vacuum.

Honestly, if we're just going to make stuff up, I prefer the hashish theory.

OK, all the jest aside, I did actually find SOMETHING.  A google search in books for "hash sign" brought me to this: 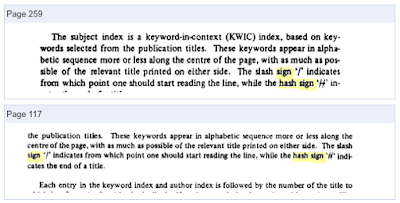 Can you see that here?  I can't get to the full content.  It looks like two different printings of the same (or a similar) article.  One uses a number sign, the other uses something new:
The source of this is from some sort of review of papers of that day.  According to Google it's a publication of the South African Council for Scientific and Industrial Research.  It seems to be a description of a Keyword-in-context (KWIC) index, or of some sort of method for marking up or automatically creating a KWIC index.

I have found many other references to KWIC software systems in that era, and I haven't found any others yet that mention a hash sign, or a number or pound sign.  Several mention a dash, and also mention it together with a slash.  "Slash-dashing" was used as a verb in a few.

What does all this mean?  I don't know yet.  This could be a printing error.  Or a symbol I'm not familiar with being imported in, and later substituted with a number sign.  It could be some combination of slash and dash, which ends up looking like an "H".  (Thus "hash"?  Oh man, do NOT quote me on that one, that is how just-so stories are created.)  But if we are making up just-so stories, it does strike me that this new symbol along with the original number sign are highly reminiscent of hash marks on the sleeve of a naval officer.

So where does this leave us?

I set out to find the pedigree of "hash".  It has none.  It's a word with no long history.  In fact, at the moment it has no real history at all, since nobody knows where it came from.  Perhaps more to the point, it seems to be completely meaningless.

Compare this to "number sign", which dates back at least 160 years, and probably quite a bit more.  It's still widely used and recognized as a number sign today.  It means "number" in this usage.  So we have both history and semantics on the side of "number sign" (and of "pound sign" for that matter).

We can't defer all decisions to the British simply because that's where the language started (although not really).  And of course we have to acknowledge that language changes.  This is an inevitable process.  But that doesn't mean we can't have opinions on how it might best change or not change.  The ability to continue to understand past writers is a great one, worth preserving.  Meaningless and pointless changes to the language don't provide any benefit to anyone, and it doesn't matter if it's the British introducing these pointless changes.  If we are going to take the time to think about our language, we might as well encourage meaningful communication.

One thing is certain: we can no longer entrust the English language to the English.