(A great place to start if you're new here is my Wide Spacing Roadmap.)


So I was reading Great Expectations on my Samsung Galaxy S6, using the the Google Play Books app, when I came across this page (screenshot): 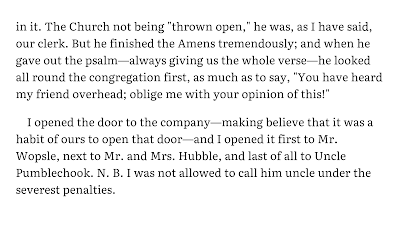 Do you see it there, near the bottom of the text?  The last few lines of text, where it reads “...Uncle Pumblechook. N. B. I was not...”, caused me a bit of a stumble.  “N. B.” stands for “nota bene”, latin for “note well”.  But what am I supposed to note well?  Worse than that, I'll admit that I didn't immediately recognize “N. B.” for what it meant, as I'm sure the majority of modern readers would not.  So which sentence does “N. B.” belong to?  Even knowing what it stands for, does it always prepend the statement to be noted, or does it sometimes append?

But what does it matter, when I could still figure it out from context?  Well, why should I ever have to stop and figure out printed text?  It's a book, not a puzzle.  To be completely honest, this is maybe not the greatest example, because it isn't really that ambiguous.  The period after “Pumblechook” can only be a sentence-ender.  You could argue that “N. B.” might be interpreted as a complete statement in and of itself, rather than a subordinate clause (again, if that were the case, wide sentence spacing would completely clarify this issue).  But the grammar is secondary, compared to the stumble in reading that it caused me.  Why should I even stumble at all in the reading?  In other discussions I've had with people on this topic, they often tell me that ambiguities can always be avoided by rewriting the sentence.  This is singularly unhelpful for old texts like this one of course, but more to the point, why should I have to torture my writing to conform to what is at best a modern whimsy of printing fashion?  (And at worst a bad habit we developed in the service of inadequate technology.)

The written and printed language is a framework for communication.  All communication, not merely your written word.  This includes Dickens' 1861 masterpiece.  It includes dialog of characters both fictional and real, who's conformance to proper grammar may well be tenuous.  Even if it were right to force people to rewrite their words to conform to broken printing technology that nobody uses any more, it still would not be sufficient.  Printed text still has to record things that actually happen, or things that we want to show as messy, or things that had already been written before we broke our printing process.  The idea that we can simply rewrite that sentence to avoid that problem is a vanity; a narcissist's view of the English language.

The work I was reading was printed in 1881.  This was five years before the Linotype was commercially introduced.  All sentence spacing was wide during this time, as it had been for about 400 years, using the standard em quad.


They all use wide sentence spacing up until the 1930 edition.  This still uses extra space between sentences, but substantially less.  I'm not sure how Google or Hathitrust came up with the 1930 date, as I find no date in the book.  But in terms of typography, it's about right.  Early Linotype printing used one spaceband plus one nut-quad (en-quad), which together are vaguely similar to a the em-quad.  But Linotype's limitations led the printing industry into a trend of steadily decreasing sentence spacing, and by 1930, a spaceband plus a thin space was common, and I'd guess that's about what this is.  (Incidentally the earliest call I've seen for word spacing between sentences is in 1911, but it wasn't until a Linotype Bulletin article from 1929 when a few mainstream printers really started taking the idea seriously).


The 1978 edition is interesting.  It was a reprint of a 1907 edition (which is why Google incorrectly dated it and made it available).  But for 1978, this is very wide sentence spacing.  In fact it's the most modern book printing I've seen with wide sentence spacing of any kind, let alone full em-quad spacing (which this is).  It's obviously a literal reprint of the 1907 edition.  This was probably intentional—it seems highly improbable that it would have been reprinted from seventy-year-old stereotypes (or Linotype slugs).  I don't actually think a Linotype was used.  In 1978, this could have been phototypeset.  I see no apparent kerns in the roman text, although some of the italics clearly overlap.  This rules out the Linotype (at least for the italic portions).  So this was either hand-set, photo-typeset, or set using a mixture of techniques which may have included the Linotype.

At any rate, this 1978 edition is not intended to show its proper place in spacing chronology—it's an outlier.  I note this because people like to make claims that “back in the old days” printers were massively inconsistent with printing rules.  And yet, with sentence spacing I find the opposite to be true - I've perused thousands of 17th, 18th and 19th century texts and never found a single one with word-spacing between sentences, at least in the U.S. or Great Britain.  (I found an example by renowned master printer Ben Franklin, but that's going to be a posting of its own someday).  And the spacing is almost always one full em.  The consistency on this point is almost hard to believe.  It's only in the last century where spacing practices jumped the shark.  Other issues might not always be consistent (like the space before the semicolon in the 1863 text above), but sentence spacing was rock-solid.

The 2012 edition shows a modern printing.  Word spacing is used between sentences.  After years of looking at wide sentence spacing, narrow spacing just looks so much worse to me.  Also, as much as we like to praise ourselves for modern typographic practices, this one is the only one that felt the need to use word divisions in this paragraph (and they're not good word divisions).

Spacing between sentences isn't just fashion, it's semantic.  It's grammar.  Sometime soon, I want to do a posting (or maybe a poster) summarizing all of the arguments for and against wide sentence spacing.  Because it comes down to this: the one-spacers only argument that is grounded in reality is “everybody is doing it” (along with several false history claims that are easily disproved).  My arguments in favor of two spaces are functional.  Sentence boundaries are clarified, modern technology is aided in automated interpretation, visible layout can be easily customized by the reader, rather than the writer. In all ways, two spaces are more functional one.

Ultimately, eliminating wide sentence spacing accomplishes only one thing: it removes information.  It is a net loss for the English language.